The Name And Fame Game

In the graffiti game, it’s all about the name. What you do with that name as far as style and skill is of course just as important, but the initial picking of that perfect name, with the perfect combination of letters, may determine if your destined for fame throughout your bombing career, and thereafter. Eric HAZE chose right. Born and raised in New York City during the golden era of graffiti, HAZE found that fame hitting trains in the early 70’s, starting his own design studio in the 80’s, a streetwear line in the 90’s, and now currently, his fine art world take over. It’s hard to find someone that doesn’t know his name. 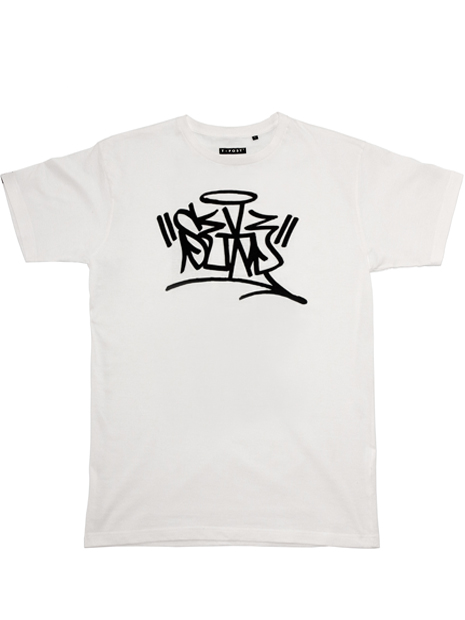 TONY ARCABASCIO: What up SE3? ERIC HAZE: What up Tony A? TONY: A lot of people probably don’t know you used to bomb SE3. HAZE: I think real graff heads know. But back in the day, everybody had a backup name. SE wasn’t my first name, but it came pretty early on... Maybe 72-73. It came from 2 directions. My main partner, Michael, wrote ME1, and my other partner, Keith, JIVE, shortened his to JE, so I picked SE. We were ME, JE, & SE. I picked the 3 because it was the mirror of the E, having always been attracted to symmetry since I was little kid. But also it was the era of IN and IZ... It was the dawn of the 2 letter throw-up name. It let us stretch the paint and do throw-ups fast. TONY: I feel like back-up names for most writers would sometimes be shortened versions of their names, almost like initials, for those same reasons, but at some point you ended up changing your name entirely. HAZE: Yes, to HAZE. The same way you’d shorten your name for speed, sometimes you wanted a longer name to get freaky with. When I changed it, people always joked, asking

The initial picking of that perfect name, may determine if your destined for fame throughout your bombing career. Eric HAZE chose right.

me if it was from ‘Purple Haze’, and yes, I was literally tripping balls at 13 years old listening to Jimmy Hendrix’s ‘Are You Experienced’, and the song ‘Purple Haze’ is where the name came from. TONY: And it ended in the E that you love, so it all worked out. HAZE: True. The SE3 tag was indecipherable to the uninitiated because it was built as code for the underground, where as HAZE was built for speed as a brand, so I ended up pushing it to the forefront. But early on, at that time of transition, SE3 was still my primary name, and HAZE was my back-up. I think it was 1981. Zephyr, Futura and I

where painting two, block long murals on Park Avenue South and Kaity Tong from ‘Eyewitness News’ came and interviewed me. She asked me my name. I thought quickly and figured, I wanted to be known because we were coming above ground, but I was still hitting trains so I needed to be careful. It was the first time I put Eric in front and linked them together, answering ‘Eric HAZE’. I went home and watched it that night. I saw Eric HAZE on TV in those TV letters with the drop shadow behind it, and that’s when it clicked. I never went back. TONY: But you were bombing HAZE already at the time, right? HAZE: I was bombing HAZE, but I caught myself from giving my full real name by putting HAZE after my name Eric for the first time publicly. That was the lightbulb moment. We were transitioning to a public space and trying to get recognition as artists, not just props underground, and I realized, with some quick math, that SE3 was too abstract for people to hang onto in the world of name recognition. I think it was the first case where I did for myself, what I ended up doing for other people, as a career. TONY: You

branded yourself. HAZE: I made a choice that HAZE was more memorable and recognizable. There was no reason to brand myself as SE3 because it was too slippery. And from that point on I pushed HAZE to the forefront professionally, formally using Eric HAZE as a designer and art director, and simply HAZE as a brand. TONY: All this talk makes me want to go out. You want to go throw something up somewhere? HAZE: Nope. TONY: Not even something quick? HAZE: Nope. TONY: Why? HAZE: Look... I always looked at graffiti as a sport. We knew it was something that wasn’t built to last forever. Not sure if it was that we knew we were kids that needed to grow up some day and take on responsibilities, but we saw the potential of having careers early on as teenagers, so I understood where the fork in the road was, and when I needed to take that turn. At the peak of the golden era of graff, there were true crews: RTW was my team, MPC was a team, CIA, etc... Every Winter and every Summer was a season. I always looked at it with the goal of putting up the best numbers, or the best statistics, you could every season. And if you win the ring a couple of years in a row you could hang it up. My team did that. For me, professionally, I like to say, that when I was done with my playing career I began to coach, and I built my own franchise and I’m still the coach and I can put myself in the game if I need to in the 4th quarter, but that was that... I was conscious towards the end of it that it was time. In effect, I wanted to pull a Jim Brown. I wanted to put up the best numbers I could and hang up my cleats and retire while I still had fresh legs for the next thing. And I kind of made sure never to do a Michael Jordan and have an ugly look, missing shots on the come back. TONY: All these years we’ve known each other and I don’t think I ever knew your last name? HAZE: [laughs] HAZE is my real last name as far as I’m concerned, but to find out my government name you would have to arrest me or have me write you a check. TONY: I’ll take a check.