Hello, My Name Is Awesome

Social media is giving us access to the best of the best, at any given moment. Whether it’s skateboarding, linedancing or beekeeping, the bar is high and constantly in your face. Is this the inspiration you need to push yourself, or will this never ending stream of online-high achievers break your spirit, deterring you from even trying? Just what is “good enough”? 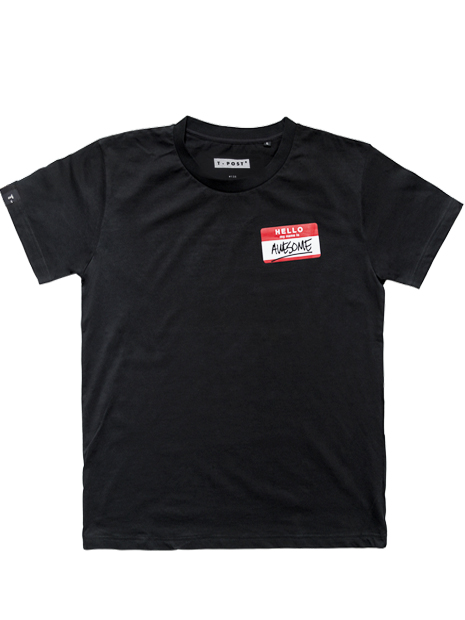 Win or lose, I just don’t care. I seem to have been born without a competitive streak. This became very clear to me at an early age, riding home from the Saturday soccer game after a (supposedly) humiliating loss against the neighboring seven-year olds. As my teammates cried tears of frustration and grief, clenching their little fists, muttering incoherently about “unfair referees” and blaming everything from the weather to badly cropped grass for their misfortune, I sat unbothered, carefully studying the small scrapes and bruises covering my knee following a badly timed tackle and humming the theme song of the unproportionally powerful Mighty Mouse. Still, I could sense something was off. How come I didn’t feel bad about the loss? By sheer willpower I mustered a couple of tears, offered a few lame insults relating to the referee and sighed in relief when my classmate – and the team striker – Måns gave me an appreciative pat on

Whether it’s skateboarding, linedancing or beekeeping, the bar is high and constantly in your face

the shoulder. I’d fooled them once again.

I’m fully aware of the fact that this inherent lack of “winners instinct”, had I been born at any other time in history, would have made me an almost certain candidate for early demise.  In a society where survival of the fittest actually means win or die, and people fight for food and shelter, sitting around humming the theme music of Mighty Mouse is a fast lane to starvation. But as luck would have it, I’m an only child, a skinny white kid brought up in safe 80s-middle class Sweden, with all the privileges attached to it: never going

hungry, great access to education and healthcare, and an almost infinite social safety net to catch me if I fall. In short: the world is my playground.

This very lack of competitiveness however, has given me a certain edge when it comes to being able to study my fellow man from a distance, an objective view to analyze the destructive and eroding effect of losing, as well as an understanding of the driving force of craving to be the best. And conditions have changed.

It used to be, whether it was basketball, skateboarding, soccer, or videogames – you’d measure yourself to the most skilled kid on the block. This was the standard, and unless you grew up next door to Stephen Curry or Ryan Sheckler, being “the best” was somewhere in reach. Maybe not just yet, maybe not this season – but with a lot of practice, maybe, just maybe you could blow everyone’s minds and be the baller-of-the-block within a few years. The stars of the NBA and skate-scene were God-like figures, creatures of another world.

These days, the very best is far more accessible. Social media gives us direct links to our heroes, a sort of constant “behind the scenes”-view of the very elite in whatever field we aspire for. Inspiring? Sure, as a kid I could only dream of having a constant stream of content from my favorite skaters, soccer players and guitar-gurus. But what happens when you are bombarded with Instagram-clips of pro-skateboarder Ryan Sheckler doing impossible gravity defying lines every twenty minutes, while you’re still struggling with your first kickflip? With all this information, and so many people pushing the limits, standards are getting much higher. Is there a risk of feeling like you’re never good enough? I mean, if you can’t be the best, why even bother – right?

In Malcolm Gladwells 2008 bestseller ”Outliers – The Story of Success”, the author takes it upon himself to identify just what makes successful people, well, successful. By now, you know the theory: pretty much anyone who is REALLY good at something has practiced that something for about 10 000 hours. That means you´ll need to spend roughly 20 hours a week over the next 10 years to truly master your trade. That’s a shitload of kickflips, right? This is of course simplifying it a bit. Becoming truly great at something takes practice, but there are a lot of other factors to consider: timing, intelligence, cultural context, legacy, hell – even the month you’re born plays into the equation (Gladwells statistics for instance, show a staggering proportion of professional hockey players are born in January–March). Add to that the overload of seemingly effortless success displayed in social media, and it’s hard not to feel like a failure, like the odds are stacked against you.

But here’s the thing: finding inspiration in the success of others is fine and all, but what you need to ask yourself is: “do I love what I do?” You see – history is filled with people making it in spite of huge physical and social challenges. Finding true joy in what you do, and believing in yourself is the best tool you have. I know, it sounds corny as fuck, but that doesn’t make it any less true. Just ask Mighty Mouse.