Let The Game Speak For Itself

Everyone talks about Ricky Powell’s iconic images of NYC and the Def Jam records scene of the 80-90’s. They talk of how he loves weed, and of of his 101 nicknames like ‘The Lazy Hustler’, ‘The Funky Uncle’, and ‘The Cool Substitute Teacher’ [just to name a few]. A lot of people have shit to say about Ricky Powell, but I want to take a second to hear what ‘he’ has to say about something super dear to his heart... The game of basketball. 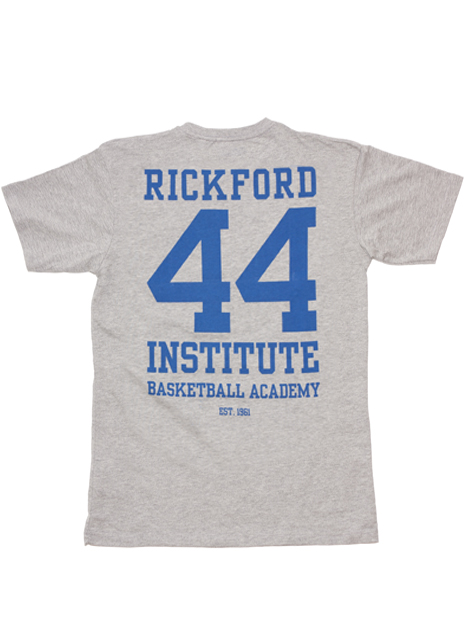 TONY ARCABASCIO: I always heard you had one of the sweetest jump shots around, but I think that came from you. Is that really true guy?
RICKY POWELL: It was quite smooth, if I may say. You’d want to take a portrait of me each time.

T: But you knew how to move as well?
R: Listen, I could never dance, so I did my dancing on the basketball court.  I was very good. A lot of Italians - the tough ones - would say, “Yo, you play like your black”. My ‘soul’ comes out on the court.

T: You used to play pick-up games in the West Village?
R: Well, I grew up in the Village, but I expanded. I used to go to Queens and Brooklyn to play. I liked getting on a train and coming out of the station in a whole new world to play ball with people I didn’t know. That’s what attracted me to playground basketball.

T: Don’t know if you know this, but back in my senior year of high school, I was one of the ‘Top 10 Highest Scorers’ in my county. That was 1988…
R: What, the Jewish league in Long Island, NY? [Laughs] I bet the competition was fierce.

T: [Laughing] yeah but regardless, there was a lot of fucken people in Nassau County. To be one of the ‘Top Ten’ in anything with that many kids involved has to mean that I had skills dude. I got moves, dick...

“You can tell a lot about someone by their game on the court.”

R: Oh, so you could touch the backboard?

T: I guess the real question I want to ask you is…
R: Am I black? Yeah my soul is. Black chicks dig me. Because of the way I used to play. But i can’t dance for shit. Isn’t that interesting, that dichotomy. I used to make the girls scream on the sidelines. One time I did that in Flushing, Queens. I had these Italian girls screaming for me. These girls had their wifebeaters and these doorman-style pants with the stripe down the side and canvas Pro-Keds.

I used to love going out and playing in Flushing. I’d bring my radio, a couple of joints…

T: Shit sounds like fun. But to get back to the question I wanted to ask,... when you go to these new courts or neighborhoods, is it easy to get picked-up in a game?
R: That’s the thing, it’s a challenge. You have to behave.

T: But what’s the deal? Do you just sit on the sideline bouncing your ball, hoping to be asked to play?
R: Usually I’d go with a friend so I had someone to talk to. You don’t want to be miserable on the trip, plus you don’t know what could happen. You know, you score on someone in front of their girlfriend and they get upset, then the baseball bats have a chance of coming out. But I always behaved. Playground basketball teaches you about life. When you go somewhere else, you act right. You don’t go flaunting your 200$ sneakers and some fancy outfit & jersey, acting like your all that. If you do that, you deserve a beating, and a chase to the subway station.

Me, I like meeting people. I fucken wish I had a camera in those days - late 70’s, early 80’s. Something I regret.

T: Now that you started on that topic, is there a street ball etiquette that people need to follow when rolling up on a new court to pick-up in a game?
R: You just need to act right. You act like a jerk-off, you can catch a beating. Act right. Make it a pleasant and positive experience. Don’t go walking in their park dissing and shit. You want the experience of getting into a game, with new people, in a new neighborhood.

T: What happens if you know you could wreck whoever’s playing that day? Do you hold back a little out of respect?
R:Yeah, you don’t want to humiliate people. You never want it to get personal. You want it to be enjoyable. At least I did. There are certain parks where ego is very high on the agenda, like Manahattan Beach in Brooklyn. Not my style.

T: So how about if people come to your home turf… you being the host? Do you ignore them a little while? Like, when do you acknowledge that they want to play with you?
R: Good question. We tried not to be snobs. We gave anyone that came in respect, and then we let the game speak for itself. You know what I say? You can tell a lot about someone by their game on the court. If they were all hectic and in your face on defense, I knew they were having problems in their life... like, relax dude. And if they where chuckers and didn’t pass, I knew they where desparate for attention. I hated guys like that. I like a good team. It’s enjoyable working as a team to make a nice basket. Teamwork is the most satisfying thing.

T: I agree man. That’s with all sports and all things in general.
R: Act right, both on and off the court, and life will be nice.