How do you get thousands of complete strangers to pledge 630 000 thousand dollars to a crazy movie project taking place in an unknown town in northern Sweden? You make an awesome trailer – that’s how. A trailer packed with kung fu-nazis, 80´s style fight scenes, time travelling vikings and a rouge cop dodging man-eating dinosaurs and murderous arcade games come to life. 28-year-old director and producer David Sandberg started his career as a commercial director in Stockholm, but had dreams of his own. David left his safe job with an ad-agency to pursue an idea that had been brewing for years. 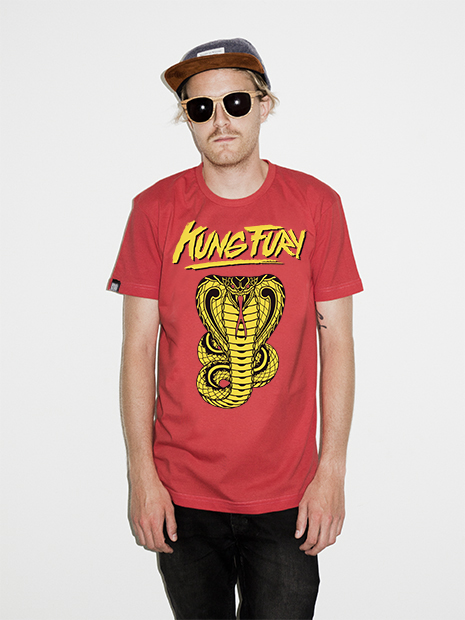 David Sandberg: I´d been messing around with 3D-effects since high school, and just got caught up. The concept of Kung Fury kept building up, and I had to make a play at it. Jonas Pekkari: But why move back to your small hometown Umeå, it seems like a step back from the industry? David: I knew a lot of creative people involved in filmmaking back home, and I needed to focus. After months of work I applied for a local film grant. I sent in a trailer, but it was rejected. Just as well, the first cut wasn´t that good. Jonas: But you didn´t give up? David: Nope. I rewrote the script, made a new trailer and applied again. This time they liked it, and I got a grant for about 12 000

Everyone here at the Universal office is crazy about the trailer, we have been trying to reach you all week!

dollars. That gave us a little bit of space, and we could finish about fifty or sixty percent of the movie – then I was completely broke again. I had to move in with my mom, and I sold off all my furniture. I guess Kickstarter was sort of my last way out. Jonas: What were your expectations when you turned to Kickstarter? David: I´m not sure, I just really wanted to get my movie out there. I just figured people might like it

once they got a taste of it. And they did. Within 24 hours 180 000 dollars was pledged, and the meter kept running. Word kept spreading through social media, grabbing the attention of Hollywood stars like Elijah Wood and Seth Rogen. Pretty soon journalists started calling. It was unreal. I was on the phone with a friend, talking about how crazy it was, and during the conversation 11 000 dollars got pledged. I didn´t sleep for days. Jonas: Did all that attention add an element of pres - sure? David: Not really. I already had a complete script, and it was well worked through. If anything, it´s my own quality as an actor I´m worried about. But then again, it sort of suits the 80´s action genre, having a half-ass leading man is part of the charm. Jonas: Some of the pledgers actually bought small parts in the film – how did that

work out? David: It was amazing. They travelled from Russia, Germany, Texas, from all over really. Around 30 people gathered at the studio for a couple of days of shooting, but some of them wound up staying for weeks, helping out around the set. They slept in my grandmother’s garage; they called her “Grandma-Fury”. Jonas: And Hollywood started calling. David: Yeah! A week into the campaign I was so stressed out I had to take a break from the computer screen. I went over to a friends’ house just to chill, and that´s when Universal called. “Everyone at the office is crazy about the trailer, we have been trying to reach you all week!” I ended up going to LA for two weeks, with several studio meetings every day. After the official meet-and-greets I had coffee with Elijah Wood, drank beers with Seth Rogen and had Jorma Taccone from The Lonely Island over for pizza and a movie. Unreal. Jonas: So, did the meetings pan out into anything? David: Sure! I´m now on the same agency as Martin Scorsese and Quentin Tarantino, sharing agents with Pharrell Williams. At this point, it looks like a full-length film-version of Kung Fury will become a reality. But to me it´s important to get the first version out there, the one where I´m in complete creative control. Once a big studio get´s involved there´s a risk of some of that original vision getting lost along the way. Now, I´ll always have the original Kung Fury to be proud of. Jonas: You were looking for 200 000 dollars from Kickstarter, but ended up getting over 630 000 dollars. How did that affect the film? David: 630 000 dollars may sound like a shitload of money, but when it comes to making a movie you still have to get creative just to make it last. It gave me that edge to be able to really raise the bar, but still a lot of people have put in a ton of hours for free, otherwise it wouldn´t have been possible. Let´s just say I owe a lot of favors. So what does the future in Hollywood hold? Who knows? With Kung Fury, David didn´t just get his foot in the door – he round-housekicked the damned thing in.