Growing up in the midst of the hardcore and straight edge-movement of 1990’s Umeå, alcohol and tobacco has naturally always been a big no-no for designer/musician Marc Strömberg. But the 30-year-old has finally found his drug of choice: sugar. In late 2016 Marc launched his own brand of soda – the cloudberry grenade – and now his goal is clear: World Soda Domination. 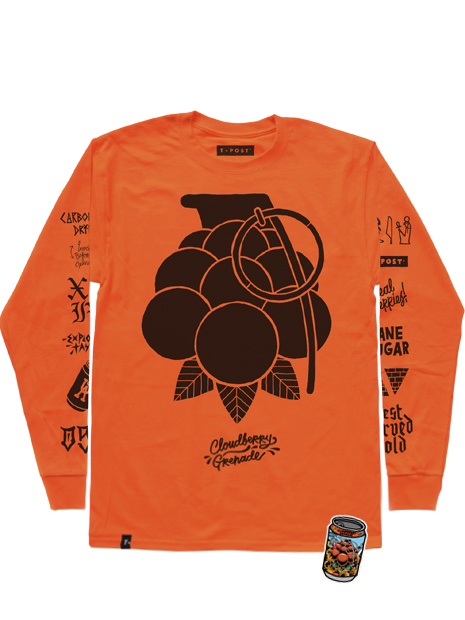 December. Daylight is – at best – sparse this time of year in northern Sweden, the sun fighting its way over the horizon around 10:30AM, only to retreat but a couple of hours later. From his office space at creative hub Sliperiet Marc Strömberg has an almost perfect view of the frozen river below, blocked only by the sharp silhouette of Umeå Museum of Art – internationally celebrated as one of the most beautiful art museums in the world. In the somber and academic surroundings, Marc sticks out with his facial tattoos, beanie and torn Earth Chrisis-tee. Still he seems perfectly at ease, nodding casually at a passing office-neighbor on his way to the break room. But then Marc has had a lot of practice in being different.

“I’ve always been sort of the odd man out. It’s funny: when I was in the hiphop-crowd I was labeled the ‘hardcore-dude’, and on the

And now his goal is clear: World Soda Domination.

hardcore-scene I was always viewed as the ‘hiphop-guy’. I didn’t mind though, they’ve always accepted me for who I am.”

At the age of ten Marc started his first hardcore band, embracing the growing straight edge-scene of 1990’s northern Sweden. Bands like local giants Refused were at the forefront of a revolutionary movement waging war on the meat industry and capitalistic establishment. Marc was fascinated with the subculture, and produced an ambitious hardcore fanzine giving him access to the most influential bands in the genre, receiving albums and merch from small independent record labels by mail. “They probably thought I was a lot older, I highly doubt they would’ve sent me all that stuff had they

known I was, like, eleven or something.” At the same time, in a parallel world, he was creating hiphop-tunes and riding his skateboard with his neighborhood friends, kids who would go on to become the core of the creative collective Random Bastards.

It seems like sort of the opposite ends of the spectrum, on one hand the 90’s hiphop-scene with its obsession with luxury cars, expensive brands and romantic relation to drugs, on the other hand the straight edge movement preaching a drug-free lifestyle and anti-capitalism. Was it hard joining these two worlds?
“Not really. I mean, I just never got into drinking or smoking; I was straight edge from the age of ten. My mom raised me a vegetarian, and have never really had any great interest in food or beverages. To me it’s just fuel. I loved making music, designing album covers, hanging out and being creative with my friends – whether it was hiphop or hardcore. It was never about judging

people over their choice of lifestyle, I enjoyed the contrast.”

The Cloudberry – or Rubus chamaemorus – is indigenous of the northern hemisphere and grows wild throughout the Nordic countries, Russia, Japan, Greenland, most of northern Canada, Maine and New York. Although referred to as a berry, it is actually a stone fruit, and it’s bright orange pulp is bursting with flavor and vitamin C. But it wasn’t the sweet taste that first caught Marc’s attention, starting a ripple of ideas eventually landing the weird little berry an album-cover, a new soda-brand and countless tattoos on bodies all over Umeå. “I don’t know, it just has this really powerful look to it, and kind of resembles a grenade. That symbolism really works, because nature is under attack right now. I’ve got a ton of ideas on weapons and berries!“

This one berry however, quickly caught momentum. After a bit of experimenting, Marc had the recipe for his very own cloudberry soda ready for world domination. “I just couldn’t believe there wasn’t already one on the market, it’s crazy good!” Along with his friends at microbrewery Beerstudio, Marc is looking to expand his bubbling soda kingdom, experimenting on new brands and combos all the time. “We’ve tried loads of flavors: Marzipan cake, ginger bread, pine, bacon. The bacon soda, sadly, was absolutely awful. I had such high hopes on that one.”

So what’s the best soda of all time?
“Easy: Dr. Pepper – obviously. What does it even taste like? Cherry? Cola? Almond? EVERYTHING!! NOTHING!! Hands down the best soda that will ever be created.”

Aside from soda production and graphic design, Marc hosts a weekly show on Sweden’s biggest public radio channel: “P3 With Marc Strömberg”. Every Tuesday night, Marc fills the radio waves with three hours of black metal, hardcore, punk and rock. He also combines his passion for hardcore and soda in the eclectic Instagram account @hardcoreandsoda. It truly seems Marc has found his place, so what’s next? “You know what, I basically do the exact thing as I did at the age of ten: Play music, illustrate record covers, and drink soda. I think I’ll just keep this up for as long as I can.”