In summer of 2009, the Beastie Boys were going to perform at the All Points West Music and Arts Festival at Liberty State Park in New Jersey. Ten days before the upcoming show, Adam “MCA” Yauch announced that he’d been diagnosed with cancer and the band had to cancel their future tour dates. 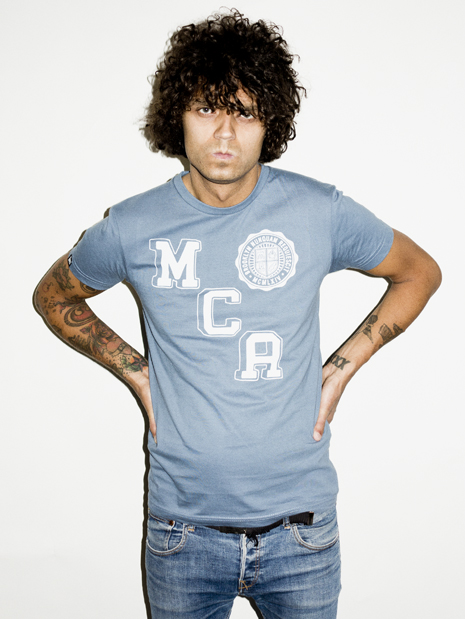 With no Beasties for the opening act, Jay-Z stepped in for the gig, rapping Beastie Boys’ own No sleep till Brooklyn as a tribute to Adam Yauch and his band. The mud and the rain didn’t seem to matter, people were euphoric about the homegrown rap star Jay-Z honoring the Brooklyn trio. Three years later, MCA’s struggle with cancer came to an end. Adam Yauch died at the age of 47. To celebrate his memory, fans gathered on May 19th at Union Square in New York City together with Mike D and Ad-Rock on the so-called MCA Day.

Yauch founded the Beastie Boys in 1979 with Michael “Mike D” Diamond and Adam “Ad-Rock” Horovitz. Originally coming from the hardcore punk scene, the Beastie Boys got into hip hop, taking the genre to a whole new level. In 1986 the group released their debut album License to Ill and the success was a fact. Three Grammys and a #7 spot on the Billboard Hot 100 with the single “Fight for your right” was just the beginning. 26 years later with over 40 million records sold around the world and four #1 albums, the Beastie Boys was inducted in the Rock and Roll Hall of Fame, an achievement that is definitely something out of the ordinary, since they are only the third hip hop group ever to be inducted, after Run DMC and Grandmaster Flash.

What made Beastie Boys one of the most successful hip hop groups ever is probably the perfect blend of mixing sounds, humor and a bit of a Fuck You

May 19th MCA’s struggle with cancer came to an end. Adam Yauch, one of the founders of Beastie Boys, died at the age of 47 and he will be missed.

attitude. They did things their way and their music became timeless. Many of us grew up with the Beasties, following their evolution from rebellion teenagers to mature adults of great awareness about the world. The success didn’t seem to affect their ability of always keeping their feet on the ground and always staying close to their fans.

The very essence of the group, and the milestone in the Beasties career, many would say is the 1994 single Sabotage from the album Ill Communication. In 2004, Rolling Stone magazine ranked "Sabotage" #475 on their 500 Greatest Songs of All Time list. It’s a perfect mix of rock and hip hop music and has no doubt influenced bands like Korn and Rage Against the Machine.

What the future holds for Beastie Boys is yet to be seen, but one thing is sure, Adam Yauch will be missed. Not only was he the founder of the trio, he was also the head behind many of the Beastie Boys videos like "So Whatcha Want," "Intergalactic," "Body Movin" and "Ch-Check It Out ", directing the videos under his alias Nathanial Hörnblowér. He would later make his film directing debut under his real name with the basketball documentary Gunnin' For That #1 Spot.

Before leaving this world, Yauch went ahead and used his own name to do the epic “Make Some Noise” video for the trio’s last album, “Hot Sauce Committee Part Two,” with an all-star cast portraying the Beasties: Elijah Wood, Danny McBride and Seth Rogen as the 1986 version, and Jack Black, Will Ferrell and John C. Reilly as the Beasties of the future.

Yauch touched many people for sure and became a true political activist focusing mainly on human rights after beginning his spiritual path as a Buddhist. He met Dalai Lama several times and founded Milarepa Fund, a non-profit organization dedicated to promoting awareness and activism regarding the injustices perpetrated on native Tibetans by Chinese occupational government and military forces. In 1996 the fund organized a Free Tibet concert in San Francisco, making it the biggest benefit concert on U.S. ground since 1985's Live Aid. Stars like Red Hot Chilli Peppers, Björk, De La Soul, Rage Against the Machine, Smashing Pumpkins and Fugees were some of the acts that performed. For future concerts, bands like Pearl Jam, Run DMC and Radiohead supported the free Tibetans movement. A great cause and important issue, but would these concerts have been as successful without Yauch? Hard to say, but there’s no doubt he was a great influence for many people, including a great deal of artists. He has been described with phrases like: “It’s not every day you meet as wise people as Adam”, "A man of colossal talent and charisma", "A true pioneer of art” and “He was a super-genius, a visionary and, most importantly, a really good person”. Reading people’s thoughts about Yauch and how important he was for many fans around the world, gives him almost a prophetic status (surely Dalai Lama has a little contribution to that).

So, what else is there to say than to state that MCA is the kind of person they name colleges after.