Alife opened it’s doors in 1999. For those that don’t know, Alife was part of the ‘cool brand’ clique running downtown in New York City at the turn of the century. As one of the founders, that statement may sound cocky, but it’s true. When I walked away in 2006 to focus on being a daddy, a new guy had just walked in to help run stuff. Me and Treis overlapped for a hot second back then, but haven’t talked in a long time. It’s nice to finally sit down... 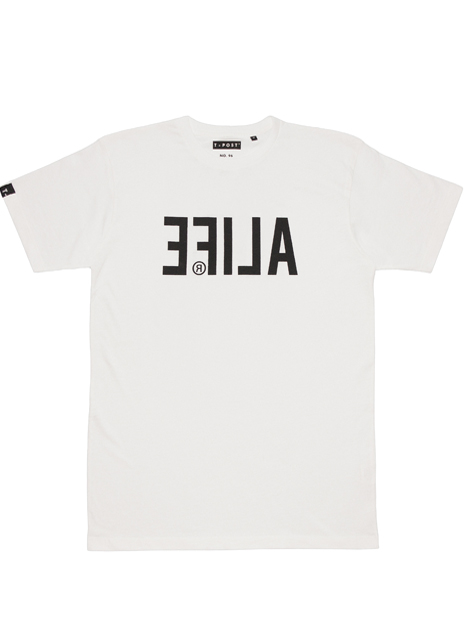 TONY ARCABASCIO: Wait, what’s up with your neck? Why are you moving all weird? My neck is all fucked up too. TREIS HILL: I fucked it up this past week jogging. I woke up the next morning and couldn’t move. I guess I didn’t stretch right or some shit. My wife’s got this roach clip laying around, so I figured I’d smoke a bit to help it out. I rarely smoke. Only special occasions like holidays and snow blizzards and shit like that. I end up burning my entire lip. At this point I’m all fucked up. I spent the weekend in my crib with a burnt lip, and a broken neck... Just pitiful. TONY: That’s what happens when you get old guy. How old are you now? TREIS: Just turned 35. TONY: 35? Your a spring chicken dude. I’m turning 43. TREIS: That’s still young. TONY: And my shit sort of happened the same way. I started playing a bit of basketball on Sundays before church with some daddys I see when I drop my daughters off at school. But I spend every week, Monday through Saturday, recouping from the previous Sunday just so I can play a week later. Talking about pitiful. Like I said, we’re getting old I guess. TREIS: Alife’s old. 15 Years old. Can you believe it? TONY: Is it that long? TREIS: Yeah man. TONY: But I've been gone for what, 7 of it... Half of it. TREIS: However long

We’ve always known that power is in the people. And we’ve always had good people.

you’ve been gone is how long I’ve been there. That was right around the blackout... I mean the train strike shit, when me and you had to walk home back to Brooklyn over the Manhattan Bridge. It was like January 2006 and it was fucken freezing. But we had a good long talk. Our first one. TONY: Wait, that blackout shit was crazy guy. When was that 2003? TREIS: Didn’t some bad shit go down with Alife that night? TONY: Bad shit? Yeah, both Keefe and my girl got smacked in the face and head with a 40oz... Jenny got something like 15 staples in her head

to stop the bleeding. You never heard that story? Basically, kids broke into the Rivington Club, they ripped the door right off the hinges, and started to loot the spot. I caught wind of it from a couple of blocks away, so I ran their with a couple of people and my girl, to find the store all fucked up. As we were standing outside, in the pitch black - I mean, you couldn’t see 2 feet in front of you - the second wave of kids came rolling up. We, of course, stopped them. They recognized me and I heard some kid say, ‘Yo that’s the owner’, so they all left, only to start throwing beer bottles at us all a minute later from across the street. TREIS: They wanted those sneakers. TONY: Long story short, I walked away for a sec to get someone and came back to the store being looted again. I ran in, straight to the back, started smacking everyone in the head with a flashlight, and everyone ran, hitting Keefe and Jenny on the way out as they were trying to defend the fort as well. TREIS: And the

store got all fucked up. TONY: Believe it or not, no. Some broken glass in the showcases but that’s about it. Even though they were hanging off of shit, and trying to break into shit, they couldn’t. Everything in there is solid cherry wood, solid brass, and shatter- proof glass encassing the important stuff. TREIS: That’s true. I’ve been there since 2006, and the store still looks great. The only thing that has to be flipped is maybe the carpet every couple of years. TONY: Yeah man. We built that store out of the finest shit. TREIS: It stands the test of time. TONY: Something like that can never be replicated. TREIS: It’s not even the stores, it’s the people. It’s this cultural thing. Alife without it’s crew isn’t Alife. TONY: I agree. That’s why it couldn’t be translated in other cities in the past. How the fuck is an Alife store supposed to be an Alife store without us in there? Sure, if we had to set up a totally new concept, that can go down anywhere, but for people to think they can get the same experience that they get in NYC at an Alife in their city... Not sure that can happen. TREIS: I don’t think it was ever a retail shop. We do retail well, but it’s more than that. The only way we can get John Mayer to come in the back and play is because we’re not a retail shop. The only way Wutang and Cypress Hill, and Drake... Fucken Drake comes at 2AM to the back of Alife, as the only appearance he makes for his album drop in NYC, to perform for free... Why? Because we’re not a retail shop. Alife is so much more than that. TONY: That music shit you have going on now is fresh. Back when we started, we fucked with the art world the way you guys are now messing with the music world. A perfect transistion. I dig it. TREIS: I think that’s why we’ve been around so long. I learned from you guys to look for talent. Not just where everyone else is looking, but in the darkest, deepest places as well. TONY: Hey, there’s even beauty in misfits. TREIS: Like I said, it’s been 15 years, the rents gone up... But we’re not going anywhere. We’ve always known that power is in the people. And we’ve always had good people. TONY: Alife forever.