In the digital era copyright issues are tricky and exhaustive. With evil bots combing the web for unauthorised use of photos, your old blog post is a lawsuit waiting to happen – and at any second you might get a cease and desist-letter from a monkey. Even old Adam Bomb had to cave under the pressure of corporate litigation, but let’s just see if we can get away with this one. 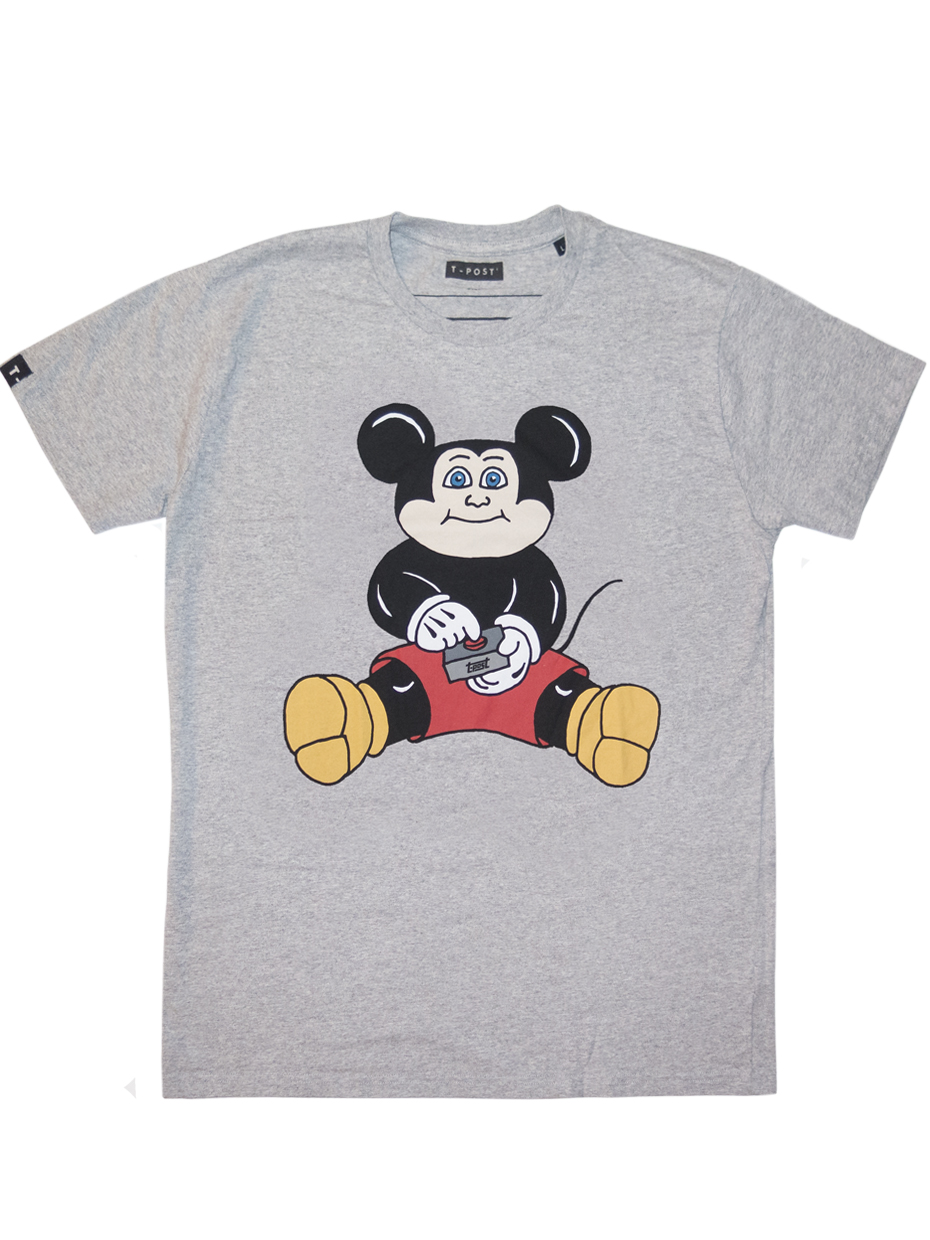 In the 1986 middle-school playgrounds nothing – NOTHING – gave you more street cred than a rare Garbage Pail Kids sticker trading card. The illustrations, featuring deformed kids eating unfathomable amounts of snot, ramming saw-blades through their guts and/or having their heads squashed in new creative ways, were as loved by the kids as they were hated by parents. A parody on the popular Cabbage Patch Dolls, Garbage Pail Kids “borrowed” a lot of the aesthetics from the former, but added a sea of grease, blood and other bodily fluids to the mix, generating a flood of “ooh’s”, “aah’s” and “yuck’s” from its young audience each time a fresh package was busted open. The character Adam Bomb became the very symbol of the 1980’s decadent and ruined generation, much to our pride and excitement. Original Appalachian Artworks – creators of The Cabbage Patch Dolls –

Any likeness between the dude on your shirt and some famous American mouse, or an 80’s trading card, is pure coincidence.

were not quite as amused, and sued The Topps Company for copyright infringement, forcing the manufacturer to settle out of court and agreeing to change the appearance of the Garbage Pail Kids to remove the resemblance. With this, the magic was lost and by 1988 the sales had dwindled.

In the digital-era, copyright issues have become a jungle. Law firms and media companies have specialized in infringement detection, with bots constantly screening the web for unauthorized use of images and design, sending invoices to bloggers over the use of a photo on an old ‘2005 post they've long since forgotten. In an

especially ridiculous instance, photographer Carol Highsmith received a cease and desist letter from Getty Images threatening to take her to court if she didn’t take down a photo from her website. The kicker: She’d taken the photo herself. A few years earlier Highsmith had donated more than 100,000 of her photographs to the Library of Congress to be used royalty-free by anyone who wanted. The global visual media company Getty Images instantly copyrighted almost 19,000 of these public domain photographs, and started pumping out cease and desist-letters to anyone using them, with one of these letters landing at the home of Carol Highsmith herself. Infuriated, she took them to court arguing the photos were donated for free public use, not for a multi-billion-dollar company to make a buck. At the very least she should be able to use her own photo? She lost.

It Would appear no one is safe from the greedy fuckers out there itching to take you down, just ask photographer David Slater, director Todd Philips and . Here are three other weird copyright cases from around the world:

David Slater vs. Monkey. In 2008, passionate nature photographer David Slater travelled to Indonesia to document the critically endangered Celebes crested macaque. In a photography session, the curious monkeys started playing around with the equipment resulting in a series of funny “monkey-selfies”, later published in – among others – The Guardian, The Daily Mail and The Telegraph. David Slater's career was soaring, until PETA decided to sue claiming the selfie-monkeys held copyright of the photos. A series of trials has led to David Slater losing the copyright, the court stating that works created by a non-human cannot be copyrighted. So the monkeys got screwed too.

Hangover 2 vs. Mike Tyson’s tattoo artist. The 2009 blockbuster Hangover 2 grossed $586.8 million worldwide, beating even the huge success of the first film. But one small detail almost killed the entire release. When Stu (Ed Helms) wakes up in a filthy Bangkok-hotel room he finds himself with a face-tattoo identical to the one Mike Tyson has. After the film’s opening weekend tattoo artist S. Victor Withmill sued Warner Bros. over copyright infringement, claiming the tattoo-design was an original artwork especially designed for Mike Tyson. At one point it looked as if the studio would have to digitally remove the tattoo from the film, however the matter settled out of court with Withmill receiving an undisclosed amount from Warner Bros.

Chefs vs. Your shitty Instagram account. Now, here’s a lawsuit we can get on board with. As of 2013, German law has explicitly stated: “For carefully-arranged food in a famous restaurant, the cook is regarded as the creator of a work. Before it can be made public on Facebook & Co., permission must first be asked of the master chef.” This means – by law – you can’t post dozens of braggy pictures from your next seven-course-meal, and we won’t have to aggressively scroll through them. At least now Germany’s got one thing the world should follow.

Well, there you have it – copyright is a tricky bitch. So if anyone asks, any likeness between the dude on your shirt and some famous American mouse, or an 80’s trading card, is pure coincidence. We’ll testify to that.