A Tee For Me

With the T-shirt, anyone can become a ‘designer’ overnight. It’s the ultimate blank canvas for any ‘artist’, that can be worn and travel the universe, which is something no museum or gallery could ever promise. It’s cheap and disposable, yet can be an item worthy of collection. Even though the tee is valued in different ways by different people, it is always the perfect vehicle to be customized to suit anyone, anywhere, for any purpose. 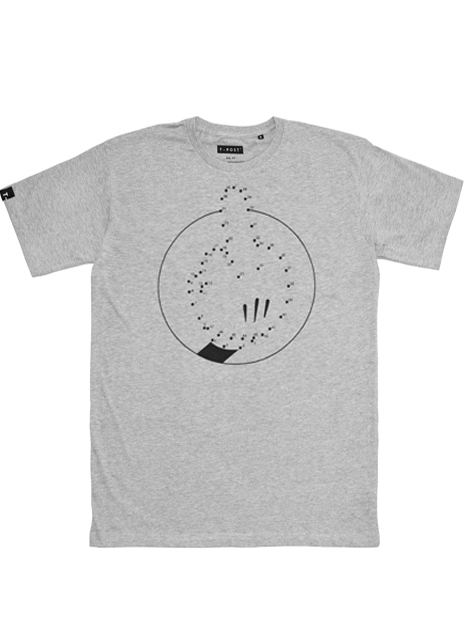 A few years ago, my mom called me to tell me she found some T-shirts I drew on when I was 10. Just some basic white undershirts I had brought to school to doodle on with these cool fabric, tubelike marker things that you squeeze to apply permanent ink. As difficult as they where to use, it changed my life [and the tees look pretty fresh if I may add. I was doing shoulder and collar hits before any of you mutha fuckers].

By 8th grade [‘82-’83... 12 years old] everyone broke out their scissors, including myself. The movie Flashdance was the shit, so that off-the-shoulder thing was a hit with the girls. And for the boys, the ‘in’ thing was to cut your tee into a half shirt. If you would have told me back then that a half shirt, with your stomach showing, was a girl thing, I would have thought you were crazy (and probably smacked you up).

That same year I stepped into the whole breakdance scene, which was all about personal style [and the style of your crew]. Basically, I was into anything my older brother Mike was into, so when he came home with a fresh new tee and sweatshirt with his name flocked [heat transferred] in an Old English font on the back and a Playboy bunny over his heart with his

crews name, I had to have one. The thing is, I didn’t have a crew like him. But that didn’t stop me. The next time I went to the flea market, I picked my own colorway and had them whip me up my own personal gear [for my crew of 1]. Flea markets, as I mentioned above, or your local mall, were the spots to be in the early eighties. We’d take the bus or have our mothers drop us off, and spend the whole day there. To get something customized was always on our agenda. The heat transfer spot was definitely a hit [every girl

needed a BFF T-shirt with her friends], but a visit to the airbrushing booth was even more desired. That was where you went when you saved up the couple of bucks you made from delivering newspapers or cutting your neighbor’s lawn. That’s where you went to get the new Iron Maiden album cover on the back of your denim jacket, or your ‘Tony loves Jenny’ tee, with palm trees and a rainbow running across, for you and your girl on Valentines day. The possibilities where endless.

For graffiti writers [me being one of them], airbrushing skills came natural. It was just an extension of what we already did out in the streets. You needed the same hand control, and the same sensibility and knowledge of overlapping and outlining colors, so it was something a lot of us gravitated towards. Because it was an expensive tool with expensive supplies, it wasn’t accessible to most artists, but for graffiti writers it wasn’t an issue. Writers didn’t pay for anything back in

the day. Art was free and for the public, and so were the supplies once you found the right place to grab them from. I feel like once writers got into the airbrushing mix, more booths started to pop up and more creative graphics where being offered. You wanted Mickey Mouse smoking a joint... No problem. Maybe Papa Smurf grabbing Smurfettes ass... Come back in an hour. Any combination of imagery and text could be achieved. There were no ‘Cease and Desist’ letters going out because nothing was being mass produced. Shit was for ourselves, not for the world or for commercial use. It was for personal style. It was to say, “This is who I love. This is my crew. These are the things I’m into. This is what I want to say. This is who I am.” When you’re younger you would die if you didn’t get the same brand of sneakers all your classmates had, or the same color puffy jacket everyone wore in the winter. It was a comfort thing. You wanted to fit in. Now, a bit older as a teen, I, and some of my peers, wanted to stand out. This was my chance to be unique. It was a way to get the hot girl to notice. That’s all you give a fuck about at that age, right?

Today, everyone has their own T-shirt line and everything is mass produced. You know, without a doubt, other people are wearing that shit the same time you are. And even if something is done custom, it’s Facebooked or Instagramed in a hot second, and if dope, copied by some brand across the globe and mass produced by them. Either way, shit doesn’t stay special for long. I try to keep it alive for myself by throwing my daughters a couple of blank tees and a Sharpie for something fresh and new to wear out in the world... And you know what? There’s not one time I wear one of their creations that I don’t get a compliment from a total stranger. There’s a lot of great graphics out there, and I love a lot of them, both mass made and limited editions. But every once in a while, it’s nice to have an original. Grab a marker. Don’t be scared...